Beauty and the Beast

The sense of anticipation and excitement surrounding this show was something quite extraordinary – the whole school had been talking of nothing else for days. A favourite tale of many children, they couldn’t wait to see how the School would bring this classic to life.

The audience took their places, and immediately found themselves in a grim dark woodland; the entire hall was overgrown by sinister black trees, courtesy of the Art Department and their wonderful talents, which also extended to an incredible cog-based costume and other stunning backdrops and props, including an amazing rose which dropped its petals as the story unfolded.

The play opened in Grimm style, set in an ancient castle (with an entire orchestra secreted amongst the battlements and conducted by Dr Taylor), and featuring a Prince (Grace Edwards) cursed by his own obduracy by a wonderfully enigmatic enchantress (Sophia Sheridan). The tale developed with huge spectacular numbers, to delight the heart of any Disney fan, and introducing us to the lovely but lonely Belle (Kira Shell).

In order to rescue her eccentric inventor father, (Georgia Friend) Belle ventured deep into the woods and found him the prisoner of a mysterious Prince in a shadowy castle populated by animated objects; a clock (Clara Chamberlain) a teapot (Isabella Dovey) and a candelabra named Lumière (Julia Curry) who dazzled and delighted the audience with an outrageous “Franch” accent, dryly witty observations, and a surreally sumptuous song and dance number to climax Act 1.

Meanwhile, back in the village, the local Lothario, Gaston, (Lyla Warner) could not believe his advances had been spurned by Belle and demonstrated his macho outrage in a series of wonderfully knowing numbers, supported with impeccable timing by his slightly fey sidekick, LeFou (Lily Suchet).

Belle, imprisoned in the castle and supported by an animated wardrobe (Emily Power), managed to reach through the Prince’s gruff outer persona by teaching him to read, the symbolic rose ceased to wilt, and the entire cast joined in a dazzling final number to celebrate the redemptive power of love as they all returned to their human forms.

One of the highlights from the production has to be Be Our Guest which took inspiration from Noire style art and the famous designer Cecil Beaton in the 1950s. Using only blacks for the dancers the number did away with a lot of extra detail allowing the puddings and food to get the highlight. Fulsome praise must go to Ms Camilla Lawson who designed and made over 30 items (5 times to scale) which had been lavishly presented with fairy lights and reflective material to pick up the glitter ball and pinks from the lights. This combined with the effective choreography, singing, and tap dancing made for a sumptuous jewel in the crown which will not easily be forgotten.

This wonderful production was down to the months of hard work both on and off the stage: Mrs Helen de Mattos and her visionary directing, Mrs Laura Evans-Jones’ production skills and her talents in technical theatre and Ms Verity Wroot’s fabulous choreography.  The accompanying music was provided by a live band comprising both staff and pupils with Musical Director Dr Ian Taylor doing an amazing job of keeping the performers in sync from behind the castle walls supported with some technical wizadry from Mr John Taylor and the technical team.  Stage management, costumes, props and hair and make up were of a professional standard thanks to the gifted pupils and staff working tirelessly backstage. On stage, the acting was impeccable, the songs pitch-perfect and the magic very much alive: congratulations and thank you to everyone involved! 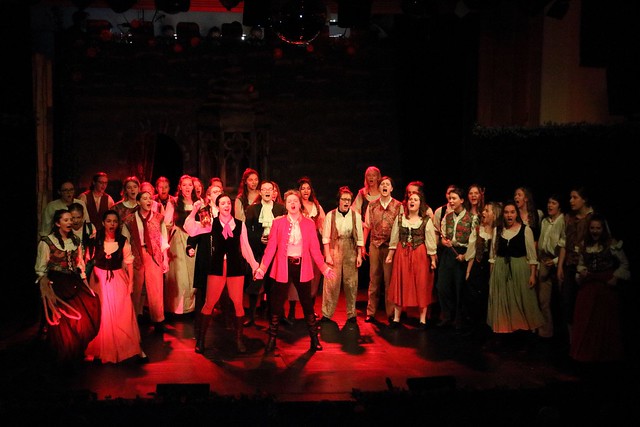