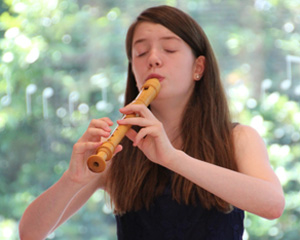 On Thursday we were privileged to have a short recital at lunchtime given by 14-year-old Eliza Haskins who was a Woodwind Category Finalist in the BBC Young Musician of the Year 2018 competition. Eliza, a Year 9 pupil at the Purcell School, was the youngest finalist in the competition.

During the performance in St Cecilia's she performed Concerto in C Major by Vivaldi, played on the tiny sopranino recorder and accompanied by Mr Joe Adams. This beautiful music demonstrated her astonishing technique and virtuosity. Afterwards she described the piece as ‘challenging’.

She also played a modern piece called ‘Meditation’ which she said was similar to one of the pieces she played for the Young Musician competition. This was very unusual music with all sorts of surprising sound effects.

During the subsequent Q&A session she talked about how she started playing the recorder (at primary school aged 7), practising (at least an hour a day and often more), why she entered the Young Musician competition (for audition practice) and how many different recorders she has (nine).