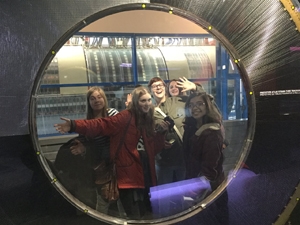 On 22 October 2016, the Physics A level students (and some Year 11s too) visited CERN, the scientific institute in Geneva, Switzerland, famous for its Large Hadron Collider, which is pushing the boundaries of science even today. While we weren’t able to see the Collider itself, as it is currently in use until 2018, we still had a great time looking around the many museums and exhibits within CERN, and finding out the various roles involved in running such a huge and important research project.

We also had a great time walking around Geneva, seeing famous landmarks like the Jet d'Eau, exploring the city and, of course, buying chocolate! On the final day, we all took part in an Escape Room, where we had to use logic and teamwork to get out of one of the themed rooms, including a pyramid, a bank robbery and a crime scene.

Overall, it was a great weekend, and one that has definitely inspired many of girls to pursue a career in Physics. Thank you staff who accompanied us on this trip and in particular Dr Wood for organising it.