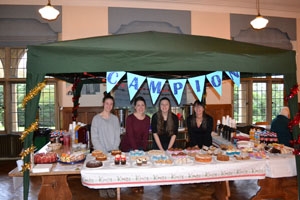 Students showed their care for others raising almost £5,000 for a variety of charities through fund-raising efforts in the run-up to Christmas.

Our biggest fund-raiser of the season was the Christmas Bazaar held on Sunday 27 November 2016.  This was a true example of the school working together in aid of good causes and enjoying the experience.  Over £2,170 was raised for several worthy causes:

Photos from the Christmas Bazaar 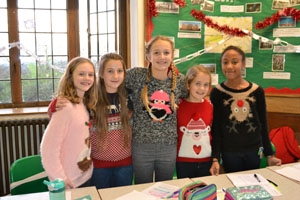 Our musical Christmas Celebration on Friday 9 December 2016 was thoroughly enjoyed by all.  Our wonderful audience joined in with all the congregational carols and also generously donated almost £400 for the Isle of Wight and Hampshire Air Ambulance Service.  In addition, Howard House held a Christmas Hamper Raffle during the concert and raised £266 to help Vicky and Molly in Year 12 to go to Lourdes in Easter 2017 as volunteers with HCPT.

On Wednesday 7 December 2016 the whole school donned Christmas Jumpers in return for a donation of £2 to support Eagle Radio's appeal to help 2 year-old Freddie from Yateley who is suffering with a brain tumour which is currently inoperable in the UK. Our efforts raised £1,024.40 which will go towards helping the family raise the funds they need to take their son to the Unites States for potentially lifesaving proton treatment.

At Farnborough Hill we can't resist a cake sale and there were several over the last few weeks.  Year 11 raised £167 at their cake sale on 8 December 2016 and donated half of this to Little Princess Trust with the remainder going towards the cost of their forthcoming Prom.  7A have been studying a book called 'Trash' by Andy Mulligan with Mrs Campbell as part of their English curriculum and this inspired them to run a cake sale for the 'Small Steps Project'.  This charity is dedicated to supporting children around the world who live on rubbish dumps and survive from scavenging.  We look forward to hearing how much they raised early next term. 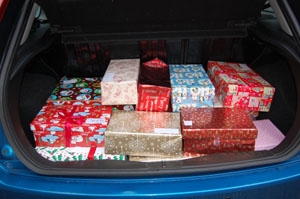 Year 10 traditionally make up Christmas boxes for 'Step by Step', our local charity for homeless young people, and managed to fill 15 boxes with Christmas goodies this year.  Well done to Year 10 and Mrs Swire and Mrs Nix.

In September Years 7 and 8 helped to harvest a bumper crop of apples from our orchards and these were made into apple juice.  Bottles of this aptly named 'Apple Heaven' have been selling fast and Mrs Chapman was delighted to announce that over £1000 has been raised for Phyllis Tuckwell Hospice as a result.

Year 7 and Mrs Harrison did a wonderful assembly about animals and their importance in our lives.  This prompted some of the girls to take part in a sponsored swim in aid of the RSPCA and they swam over 100 lengths of our school pool.  They are now busy collecting in their sponsorship money.

And finally, we have been delighted to support our own Dr Bright's charity aimed at providing a hot meal each day for needy children in Sierra Leone.  Through the sale of Farnborough Hill Christmas cards in the Tuck Shop (raising £99) and staff donations as an alternative to sending Christmas cards we hope that a significant sum will have been raised for this very worthwhile cause.

Thank you to all the girls and staff who worked so hard to organise these events and to everyone who supported them in whatever way.