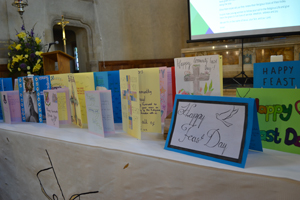 On Friday 17 November 2017 there were big celebrations at Farnborough Hill as we looked back over 200 years of the education of girls by the religious order which founded our school - the Religious of Christian Education (RCE).

The first four Sisters of the RCE took their vows in the small church in Echauffour (Normandy, France), on the Feast of the Presentation of the Blessed Virgin Mary, 21 November 1817 and this date became the order's  Community Feast Day.  There are a number of Sisters of Christian Education who are still connected with the school and it is always a joy when they can join us on this special day.   Celebrating this day is something the Farnborough Hill community has always done but this year, on the bicentenary, it was extra special.

Celebrations took place on the nearest Friday to Community Feast Day as the Sisters returned to their spiritual home in Normandy for 21 November itself.  They began with Assembly when our Head, Mrs Neil, paid tribute to the RCE, outlining its history and reminding the school that it is the vision of Abbé Louis Lafosse, founder of the order, and the early band of teaching Sisters, that continues to underpin the mission of the school today.  Sister Elizabeth who is a former Headmistress of this school, echoed her delight that this is still the case.  Our Head Girl and Deputy Head Girl read out correspondence which they have had with our sister school, Our Lady's in Dublin, and it was clear that they too have had big celebrations this year.  The Assembly finished with gifts from the Sisters to all the girls and staff and they received cards, hand-made by the girls. 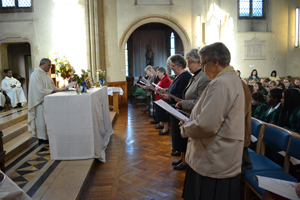 Later in the morning, the whole school community joined together in the Chapel for Mass and witnessed eight of the Sisters renewing their vows - a very moving moment for everyone.

The Sixth Form performed a wonderful entertainment in the afternoon.  It took the form of the very first performance of 'Lafosse', a play written and directed by Mrs Lori Winch-Johnson to mark the bicentenary.  'Lafosse' follows the story of how the RCE became what it is today, starting with the vision of Abbé  Lafosse and the work of the first four Sisters.

The play was beautifully acted out by our Sixth Form girls along with some very talented staff.  The audience, the entire school across two performances, were taken on a journey through time, bringing the story of Farnborough Hill and the Sisters to life.  'Lafosse' was visually splendid (see photo gallery below) as well as being an entertaining and moving tribute to the Sisters whose dedication over the last 200 years has shaped the school into the wondeful place that it is today.