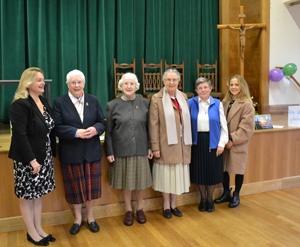 Farnborough Hill was founded by the Religious of Christian Education (RCE) on 21 November 1817 and this date has been celebrated each year by the order as their Community Feast Day coinciding with the Feast of the Presentation of Our Lady.  Traditionally, Farnborough Hill has always celebrated this day with the Sisters and this year was no different albeit that it marks the start of the 200th year since the order’s foundation and felt just that bit extra special.

The order was started by Abbé Louis Lafosse, originally a Parish Priest in Normandy, France.  As part of his work he became very interested in education and realised that there was a particular need for the education of girls.  Initially he trained four young women to be teachers and these women became religious sisters, setting up a new order, the RCE.  The order grew and schools were opened up in many parts of the world including Peru, USA, Ireland and Belgium.  The Sisters maintained their core values in these schools fostering a happy environment, family spirit, academic excellence, encouraging leadership and retaining spiritual values of faith, truth, welcome and working with others.

The RCE founded Farnborough Hill in 1889 and the Sisters worked tirelessly to expand the school and to make it as it is today.  While the school is now under lay leadership, the Sisters continue to play an important role in the school, helping on a day to day basis and as Governors and Trustees.  More importantly, we know that they pray for the school each and every day. 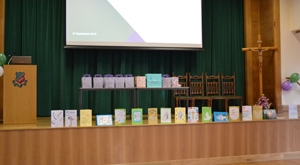 This year we celebrated Community Feast Day on Friday 18 November and the girls and staff did many things to help make the day special for the Sisters.  We began with Assembly for the whole school in the Hall which had been beautifully decorated by Year 10.  Each form had made a card for the Sisters and they were able to see these during the Assembly.  The Sisters also distributed gifts for all the girls and staff.

Later in the morning the whole school celebrated Mass in the Chapel and we were all particularly privileged to witness the Sisters renewing their vows together.  Sr Rosemary O’Looney spoke of the widespread work of the RCE across 3 continents educating generations of young people and aiming to make the world a better place.  In celebration of this special year the Sisters gave each member of the school community a keyring displaying Abbé Lafosse’s words and one of the RCE's central tenets: “Serve the Lord Joyfully and Wholeheartedly”. 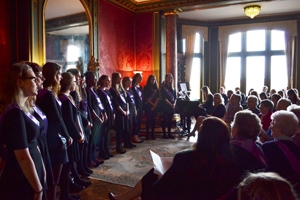 After Mass, celebrations continued with delicious food and wonderful entertainment.  The Sisters enjoyed lunch in the Refectory with staff and former staff including Dr Russell and Mrs Nelson.  They then convened in the Grand Salon for an entertainment coordinated by Mrs Winch-Johnson and produced and performed primarily by Year 12.  This echoed the traditional entertainments which used to be held in Lafosse House in former days when many more of the Sisters lived there.

The girls’ wide and many skills were in evidence: music, dance, drama, public speaking, poetry and a specially commissioned prayer (copies of which were given to the Sisters).  Compered by our Head Girl, Anna and Deputy Head Girl, Olivia the entertainment included 3 Year 7 girls reading their winning poems from a recent competition on National Poetry Day; our public speakers taking questions from the floor and two special songs.  The proceedings began with a solo tenor performance from Mr Maccherini who teaches Classics.  His beautiful Italian tenor voice singing ‘Ave Maria’ was perfect for the occasion.  Mr Maccherini’s wife is a former Farnborough Hill student and as Olivia pointed out when introducing him, ‘the Sisters have provided so much over the years that former pupils not only send their daughters but now also their husbands to the school!’  Another high point was special guest appearance from Peter, an old friend of the Sisters, who played a few special melodies before piping everyone into the Head’s study for coffee.

Comments from the Sisters give a good indication of how much they enjoyed the day:  “This is a day I shall treasure and remember for ever” said one from Ireland; “What a fantastic day, I am so moved and happy” said another.

Thank you to the Sisters and to all the staff and students who made the day so enjoyable and memorable.