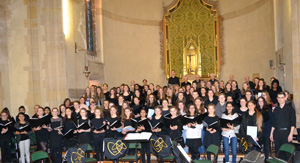 Our Easter Concert took place on Tuesday 19 March 2019 in the magnificent setting of the School Chapel and a large audience gathered to enjoy a rich and varied programme of music-making organised by the Music Department.

The first half of the concert featured some of the School’s larger ensembles, beginning with a highly accomplished performance by the School Orchestra, featuring solos from Hannah (oboe), Freya (bassoon) and Natasha (snare drum) in Ravel’s captivating and ever-popular Bolero. String Group provided a wonderful accompaniment to the virtuosic skills of violinists Stephanie and Isobel in Leroy Anderson’s toe-tapping Fiddle Faddle, whilst a number of individual girls were showcased in the Wind Band’s rendition of Brian Fraser’s Scottish Folk Song Suite. The Swing Band gave a typically lively performance of a medley from Fiddler on the Roof  before five of our most accomplished instrumentalists combined in a sophisticated and nuanced rendition of the Sarabande and Gigue from Elgar’s Four Dances for Wind Quintet.

After some hasty re-organisation, around 120 singers including girls from Year 7 through to Sixth Form as well as staff, parents and guests, took to the stage to perform Vivaldi’s exhilarating Gloria, accompanied by members of the Chameleon Arts Orchestra. The challenging solo vocal parts were all sung by members of the Senior Choir: congratulations to Isabella, Julia, Lauren, Hannah and Phili, as well as to Lauren who played the beautiful instrumental obligato part on the flute. Huge congratulations too to all the members of the choir who have been rehearsing hard for this epic performance: it certainly paid off and a rich and vibrant choral sound resounded around the Chapel.

Thank you to everyone involved in the production of such a wonderful evening; it certainly showed not only the high standard but also the diversity and the popularity of music-making at Farnborough Hill.  Particular thanks to the Music Department (Dr Ian Taylor, Miss Lucy Warwick and Mr Joe Adams) whose vision, skill, guidance and commitment resulted in such impressive performances.