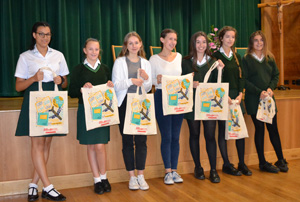 European Day of Languages was on Wednesday 26 September, so this week the School celebrated with a treasure-hunt-style languages quiz. Girls had to hunt for posters around the School, each of which contained an idiomatic phrase in a European language. They then had to decide which language it was and the meaning of the idiom, with only the literal translation to give them a clue. Girls from all year groups, and staff too, took part, relishing in the challenge of the hunt. The winners received a travel-themed bag.

Junior Assembly also had a languages theme and the girls heard all about the many reasons why studying a language is worthwhile. Languages offer you more opportunity to travel and experience the culture of a country in depth, they help to keep your brain active, they are an asset to any job and, perhaps most importantly, they help you to build resilience and confidence. The Assembly also aimed to stamp out the misconception that everyone speaks English. In fact, only 25% of the world’s population speak English, either as their mother tongue, or to a good standard, showing us just how vital it is to develop our foreign language skills.

We had great fun celebrating European Day of Languages and we’re already looking forward to next year!.