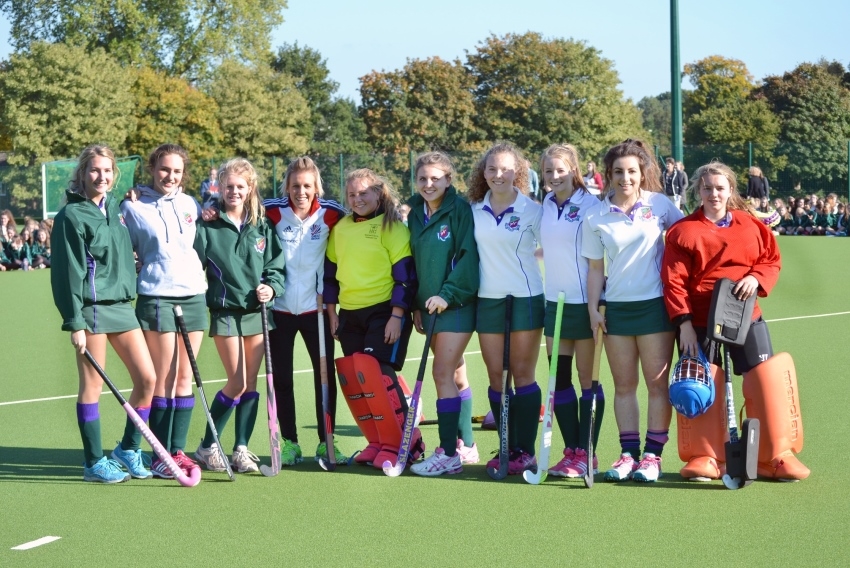 The Olympics this year has been particularly exciting for Farnborough Hill as we watched, on the edge of our seats, as Alex Danson (pictured above with some of our aspiring hockey players) and the GB Women's Hockey Team achieved their ultimate dream of a Gold medal at Rio, winning the Final on Friday 19 August 2016 in a penalty shoot-out against the Netherlands.  Alex was a key member of the team and was top goal-scorer during the tournament.

Mrs Buckle said “Everyone at Farnborough Hill is absolutely thrilled that Alex and her team secured the Gold medal; we were all watching the final match which was so tense.  Alex is a real credit to the school.  She has worked so hard to fulfil her dream and is an inspiration to all the girls in school now.  Despite being so busy, Alex regularly comes in to school to talk to the girls and share her experiences with them. One of her most recent visits was to officially open our new all-weather hockey pitch, aptly named the Alex Danson Pitch.  We can’t wait for her to visit again and show us all her Gold medal!”

To find out more about Alex and how she got to this point in her career, read the account below written by former Head of PE, Mrs Ann Berry and first published in this year's FHOGA Newsletter:

I first met Alex when she joined Farnborough Hill in 1996. It was clear from those early days that she was a very talented sportswoman showing all the physical attributes needed to succeed (agility, balance, hand-eye coordination to name but a few) as well as an innate understanding of how team games work. She had already played rounders for England whilst at Yateley Manor. The breadth of Alex's abilities was reflected by her participation in school teams: vaulting, swimming, tennis, rounders, cross country, athletics, netball and, of course, hockey. She could have succeeded at the highest level in several sports; but her heart has always been in hockey. As the school's hockey coach, it was my privilege to be part of her journey from school teams, to clubs, county, regional, national and international levels. Alex always relished being part of a team and she used her skills to help others develop theirs by the timing, pace and accuracy of her passing, rather than ‘taking over’ as some players with more advanced skills than teammates can do. This never happened with Alex, so others enjoyed playing with her at all times; and of course she could always ‘save the day’ by her goal-scoring when needed. Talent alone doesn't always result in success, however, and Alex has always had the drive, discipline and work ethic needed to make the most of her talent. Add to that the support of her family, friends, school and clubs and Alex's road to international honours was established.

Alex didn't ignore her academic commitments and gained excellent grades at GCSE and A level. How she did it was extraordinary as in the weeks before her GCSEs, she was in Argentina playing for GB and had jet lag at the start of the exams. Then it was Australia just before her AS exams and the USA just before A levels.

When Alex left school she went to university but fitting hockey training, matches and full-time study in was difficult. Fortunately, hockey got the funding to establish full-time training squads based at Bisham Abbey and Alex was thrilled to get a place. I clearly remember the first time I saw her playing for England - the thrill of seeing her play with other highly talented players, the speed of play, the accuracy of passes, the intelligent 'running off the ball' and above all, the feeling of pride and the delight that somehow I'd been part of that journey for Alex.

So what followed? The record speaks for itself - more than 250 International Caps for England and GB, European Championships, Champion League Tournaments, Commonwealth Games and as I write 2 Olympic Games. The Beijing Olympic Games have their own story as Alex nearly didn't make it. The squad was training at the holding camp in Macau prior to the games when Alex got injured, badly; her ankle looked horrendous in the pictures I saw but with lots of ice and medical care, she made it - just! Then, actually being there to see her at the London Olympics. What a treat it was to watch her win Bronze, but in a way humbling, as I could see how far she had come with coaching of the highest quality and how basic my contribution to her development as a player had been.

Beyond training and playing, funded sportspeople have obligations to fulfil - mainly by visiting schools and clubs to present prizes, helping to run coaching sessions and trying to inspire other young people to participate in sport. Whilst doing this, Alex has shown everyone she meets that she clearly loves hockey, that she is still inspired to work and improve and that the enthusiasm she had from a young age is still very much in evidence. And Alex hasn't forgotten Farnborough Hill. She returned to show the girls her medals, particularly the Bronze from the London Olympics and the Gold from this year's European Championships and was the Guest Speaker at Prize Giving in 2011. Her speech was truly inspiring and it touched every girl present as she spoke from the heart. Then when the school opened its new all-weather pitch, who else would they ask to do the honours? She hadn't realised that it was to be called after her and was so excited and pleased that she couldn't stop smiling - but that's what you get from Alex - a happy, enthusiastic, dedicated person who feels privileged to be doing every day the thing she loves: playing hockey.