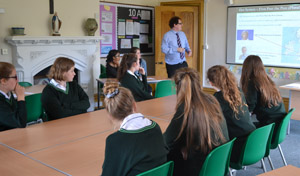 With only two days to go until the General Election, girls were challenged to consider carefully the political parties' policies during a highly informative General Election Taster session today (Tuesday 6 June 2017).  This was part of our Think Tank series of talks and was run by Government & Politics teacher, Mr Gillingham.

The session began with an introduction to our democracy and an explanation of what happens in a General Election.  Girls then split  into groups to assess policies detailed in the party manifestos on the key issues of education, defence and foreign policy, the NHS, Brexit and immigration.  Without being able to identify the parties, they had to decide which policies they preferred.  It was interesting to see how similar some of the policies are between the parties while others are very different.  After undertaking this exercise, the relevant political parties were revealed and this resulted in a few interesting surprises.

Mr Gillingham ended the session by encouraging the girls to discuss the election at home and to express their views about the various policies on offer.  Many of our students are not yet old enough to vote, but they can still have an influence by talking to their families and debating the pros and cons of the manifesto promises.