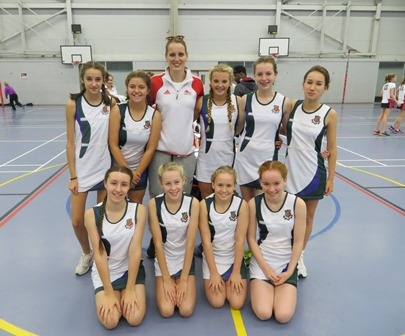 The Year 8 and 9 Netball squads were lucky enough to be given the opportunity to attend the GSA Netball Tournament at Condover Hall in Shropshire from 23 -25  September 2016. After a 4½ hour journey by coach on the Friday afternoon, we soon settled into what became a very intensive weekend of netball and fun activities.

We had an early start on Saturday and after a big breakfast we hurried back to get ready for the netball. The coach took us and a number of other teams staying at Condover Hall to the tournaments. The Year 8 team won the first match which really boosted our morale for the day. We didn’t really know what to expect but thought there would be some tough competition as this was a prestigious tournament. Throughout Saturday, we won 5 matches and lost 2, which all 9 of us were really pleased about. We also met Sara Bayman, the current England Captain, who gave us some tips from the side lines. The Year 9 team had a tough morning, but managed to win one game. The afternoon was much more successful with 4 wins out of 4.

We went back to Condover Hall and attended a question and answer session with Pamela Cookey, the ex-England captain, which was really interesting. Then we had dinner and went to find out what we would be playing for the next day.  The top 8 teams would compete for the Trophy, the next teams the Cup and the remaining teams the Shield. We hoped we had done enough to get into the Trophy group as that would make us top 8 and were delighted, and a little bit shocked, to hear that we were playing for the trophy, the highest (and hardest) tournament. The Year 9 team were playing for the Cup.

We woke up the next morning and frantically packed our bags and got ready to leave for the netball that day. The Year 8s played excellently against exceptional opposition. Unfortunately, we lost 2 games and won 1, which meant that we didn’t make it to the semi-finals.  However, we were really proud of how we played and headed home delighted, but exhausted, having had a great weekend. The whole Year 9 team played hard and enthusiastically, working well together and learning more about how each other play.

Fun was also had off the courts where we did tunnelling, high ropes, rock climbing, gladiator wall and zorbing and enjoyed the disco on Saturday night.  The whole weekend gave us all valuable experience, improving our netball skills and teamwork, so we are now ready for the season ahead.

Thank you to Miss Ellender and Mrs Aitchison for organising and taking us.