The first week of the new school year was kicked off by a particularly inspiring Think-Tank talk from the renowned political journalist and ITV News at Ten presenter, Julie Etchingham. She visited the school to talk to about her career, her specific fields of interest and her experiences in journalism. Ms Etchingham had 10 years’ experience working at the BBC before moving to Sky and now ITN.  During a lunchtime talk open to all of the school, she discussed how her career has developed from a six-year-old girl, unfailingly writing a diary, through her Catholic Secondary school education, to the high profile and influential broadcaster that she is now. This was very interesting and entertaining and was followed by many thought-provoking questions from the girls in the younger years.  One of Julie’s highlights was meeting and sitting next to the Pope at a conference in Rome and the person who she hasn’t met yet but would most like to do an interview with was the Queen! 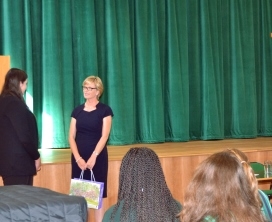 During the afternoon, a second talk to Year 11 and the Sixth Form enabled Ms Etchingham to delve deeper into her experience hosting the ITV General Election debate with all seven of the major leaders (and the only televised debate attended by David Cameron) which was especially interesting for the girls studying politics and hoping to interview politicians in the future. Julie also spoke about human trafficking – a subject in which she has taken a very personal interest.  Many of the girls were surprised to hear just how common human trafficking is all over the country and how absolutely devastating it can be for the victims. Ms Etchingham described how the victims of human trafficking pay the traffickers thousands of pounds to have a better life, but end up trapped in industries such as prostitution, relying on their traffickers to survive.  For more information on what human trafficking is and what can be done to combat it, she referred us to websites such as: http://www.cbcew.org.uk/CBCEW-Home/Departments/International-Affairs/The-Catholic-Church-and-Human-Trafficking   and http://www.humantrafficking.org

Overall, Julie Etchingham’s visit to the school was not only an inspiring and educational insight into what a political journalist does and how to get into the broadcasting industry, but also a political and moral discussion on current affairs and human trafficking. We are very grateful to Ms Etchingham for taking time out of her busy schedule to visit us and give us such interesting talks.