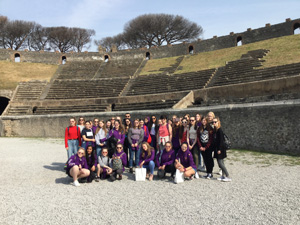 The Colosseum in Rome, Pompeii, Herculaneum and Mount Vesuvius were some of the sights experienced by Year 7, 8 and 9 Classicists when they visited Italy during the Easter Holiday.

On the first day, we all arrived at school at 3.00 am, exhausted yet excited. Fuelled by adrenaline, and the prospect of Year 9 having their own coach, we all decided to sleep on the ride to Gatwick.

Our flight arrived safely in Rome and despite a drama with a lost passport (fortunately found just before leaving the airport), we were soon on our way to the Colosseum.

With our phones, cameras and selfie sticks at the ready, a wave of purple jumpers arrived at the Colosseum. Sun-hats came out and sunglasses were put on as we walked around in awe of the huge structure. The height of it and view of Rome was enough to blow us away.  The day ended with an extremely long coach journey to Sorrento.  Following a very late arrival at our hotel and a much-welcomed dinner, we were all tucked up in bed, ready for the early wake-up call the next morning.

After breakfast at 7.00 am and a short coach ride, we arrived at Pompeii. The weather was on our side as we began our guided tour of the main street of the ancient city.  We saw the ruins of a beautiful summer house and tried not to fall over on the uneven roads that ran through Pompeii. Furthermore, after our lunch and ice cream break, we were allowed to explore the city in groups. The most thrilling part for me was finding Caecilius' house. He was a major feature of our Year 7 Latin textbook and an icon for Latin students at Farnborough Hill.

We made a quick stop at the hotel and then had time to go shopping in Sorrento.

Breakfast, now at 7.30 am, was delicious as always.  After arriving at Herculaneum, it began to rain but we pulled our trip jumpers' hoods up and carried on exploring the city. Our guide showed us many houses and paintings and we even got to peer down a few tunnels that led to more of the city that is still buried. She talked about how much of Herculaneum would probably not be explored for a long time as it is buried under the new town. You can't help but wonder what is down there.

We ate our lunch under a shelter and got back on the coach a little soggy, but no one expected what was to come.

When we got out of our coach 1 km from the top of Mount Vesuvius, it was it pouring down with rain. Even though most had jackets and ponchos, we all were soaked through. After a few minutes of walking we realised that we couldn't see much as there were many clouds. Fortunately, once we were at the very top, the clouds cleared a bit and a few good pictures were taken. Unfortunately, the rain did not stop. We tried to warm up with hot chocolates and tea but we were frozen. Once back at the hotel, many refused the chance to go shopping and snuggled up in their beds instead until dinner time.

On the last day we were lucky enough to have breakfast at 8.00 am and then hurried to our rooms to pack. Then we walked down to the harbour to see the sea. Many pictures were taken before we hurried back to say goodbye to the hotel and get on a coach to go to pizza making.

While attempting to make our dough, Mr Mac (Mr Maccherini) got a chance to show off his  expert pizza making skills.  Afterwards, we had a fantastic pizza lunch and travelled to Naples airport.  We successfully boarded our plane back to Gatwick and waved goodbye to Italy one last time.

Of course all of this would not have been possible without the teachers who came along with us. Thank you so much to Ms Landowski, Mr Forrest-Biggs, Mr Butler, Mrs Davy, Mrs Moseley, Mrs Larkin, Mrs Cappleman and Mr Mac for looking after us and I want to especially thank Ms Landowski for organising the trip, Mrs Cappleman for not only being charge of but carrying the first aid kit each day and Mr Mac for translating for us.