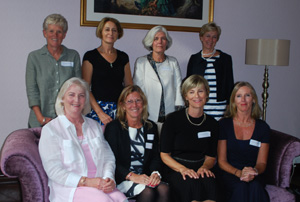 Once again, we had a great turn-out of Old Girls and their families, together with former and current staff, for the Reunion on Saturday 15 September. 40- and 20-year anniversary old girls were particularly celebrating and some had even travelled from Australia, Hong Kong and Italy to be with us.

We had the usual tea and cake whilst meeting friends and visits to old haunts such as the Tuck Shop, former dormitories and new builds which blend so sympathetically to the old style. This was followed by a different format from previous years with a Hog Roast from the School Chef on the Cloister Lawn which was very popular, washed down by Prosecco and with live Jazz to complete the atmosphere.

Mrs Yvonne Cullen shared a reflection in the Thanksgiving Service about what Farnborough Hill and the Sisters have meant to her over the years. She has been a Drama and Jazz Dance teacher at Farnborough Hill for nearly 30 years, is a mother to three Old Girls and a grandmother to a student currently in the Sixth Form.

Mrs Rosie Byrne took official photographs in the Pink Parlour as mementos of the day.