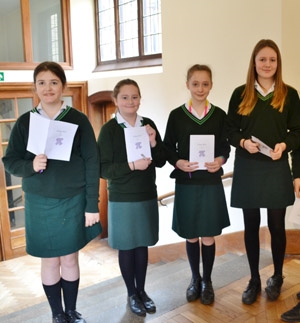 Pi (π):  A number that is approximately equal to 3.14. It is the number you get if you divide the circumference of any circle by its diameter.

Pi Day is celebrated around the world on 14 March every year. It is celebrated on this day because in America, 14 March is written as 3.14, the first 3 digits of Pi. In school, Pi Day was celebrated by the Maths Department, who hosted an exciting range of code cracking competitive activities for Years 7, 8 and 10. First, the groups had to follow clues by looking at snippets of images of different objects around the school. These clues led to the location of several safes which could only be opened by solving some rather tricky maths challenges, and once opened, contained clues which would help to crack the next safe code.

With several Year 10 groups coming in with joint results at the end, a tie breaker competition was held to determine a first runner-up, in which girls had to recite Pi to as many digits as they could. Group 13 won the tie-breaker for the Year 10 runners up position, with Lucy (10 Omega) reciting Pi to 49 digits! Pi Day was also celebrated elsewhere around the school, with the refectory serving cottage π for lunch, Sixth Formers baking an apple π, and a range of exciting maths puzzles to try on Firefly. Thanks go to the Maths Department for arranging such a fun filled Pi Day!