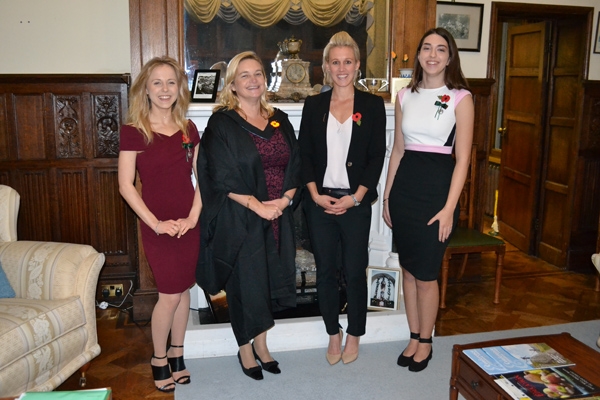 Farnborough Hill was thrilled to welcome back Olympic Gold medal heroine, Alex Danson, to present the awards at Prize Giving on Friday night.  Alex is a member of the women’s hockey team which won gold in Rio this year.  She left Farnborough Hill in 2003 having completed her A level studies; the school community has followed her career with interest ever since.  Alex is very generous with the time that she gives to the school, returning often to talk to the girls and share her expertise. 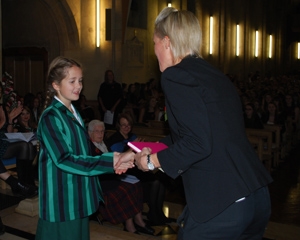 Prize Giving is a prestigious event that is always eagerly anticipated.  It celebrates not only the school’s outstanding academic results, but also the many successes in music, sport, drama and art, as well as rewarding effort, progress, achievement and school spirit. The girls’ impressive GCSE results, which have kept Farnborough Hill in the top 5% of schools in the country for ‘added value’  were also recognised, as was the continued success of  Farnborough Hill sixth formers who achieved outstanding A level results and secured places at the top universities, studying a wide variety of challenging subjects.

Chair of Governors, Mrs Claire Hamilton, gave the guests a warm welcome, saying how proud she was of the school and all its achievements.  Head, Alexandra Neil, gave a moving tribute to Lucy Pygott , a member of the school’s outgoing Year 11, who was tragically killed in a road accident in the same week as Prize Giving, while out running with her club in Aldershot.  Lucy was a highly successful athlete and would not in fact have been at Prize Giving because she had planned to be in Spain taking part in a running event.  Chaplain, Miss Sheila Farmer, led prayers for Lucy with the theme ‘You have made a place for us’.

Mrs Neil reviewed the school year and the many achievements of the girls.  She congratulated parents and staff on their support of the girls, enabling them to achieve their best.  She also paid tribute to the RCE and the Order’s special charism in this their 200th year. 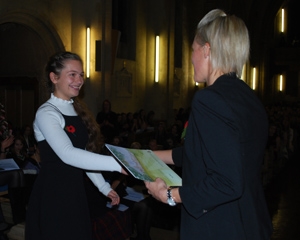 Alex Danson presented the prizes to the girls and this was followed by the Senior Choir’s beautiful rendition of ‘For Good’ from the musical ‘Wicked’, in memory of Lucy Pygott, followed by ‘Plenty Good Room’, a traditional spiritual.

Alex Danson’s speech was inspirational.  She talked of a valuable lesson that she had learnt at Farnborough Hill; that success is in the journey.  After Rio, she was given a card by a Farnborough Hill teacher which said, ‘I never doubted that you could do it.  At school you worked hard in my subject even though it was not your favourite – your best is THE best.’  Alex said that sport taught her that you are picked for a team because of your attitude and hard work, not necessarily because you are the best.  Two years ago the GB women’s hockey team was ranked last in the world championships and the team thought that it was the end.  The turning point was their new sport psychologist telling them that winning a gold medal at Rio was not enough.  Alex thought she was mad!  What she meant, though, was that world leaders are ones who put their value higher than just an outcome.  The GB hockey team’s goal now is to inspire the future and make a pathway for junior athletes, helping them to learn how to live their vision and find a way to win.  Alex says that there were 31 amazing women behind the Rio success and the feeling of ‘one team’ is something that she first found at Farnborough Hill.  Winning gold was Alex’s proudest moment but the success came in the journey.  Her final message was that behaviour creates habits and good habits breed success.

Head Girl, Anna, concluded the proceedings with courtesy and charm as she gave an engaging, and humorous, Vote of Thanks.  She mused that the last time Alex Danson was the guest of honour at Prize Giving she was in Year 7 receiving a Form prize.  Now she is six inches taller and Alex has won two Olympic medals!   She said that the school is so proud of Alex and that they take some of her success as their own.  Anna praised Alex’s words for revealing a discipline and determination that was a lesson to us all.  She said that the example of team unity had encouraged everyone and would continue to inspire them. 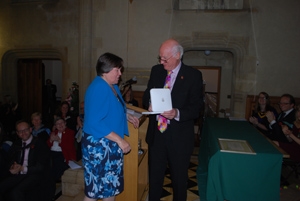 At this point guests would normally have been invited to leave the Chapel to go for refreshments.  However Chair of Trustees, Michael Maher, had one final surprise.  In an evening dedicated to recognition, he announced that former Headmistress, Sarah Buckle had been awarded the Benemerenti medal by Pope Francis for her dedication to maintaining the Catholic ethos of Farnborough Hill.

Guests, staff and students left this wonderful ceremony to enjoy refreshments and catch up on everyone’s news.   This year, of course, everyone wanted a picture with Alex and her gold medal, which everyone wanted to hold!   At the head of the queue were four Headmistresses (three of whom are pictured below with Alex and her medal):  current Head, Alexandra Neil, Sarah Buckle (2007-16), Jacqueline Thomas (1997 – 2007) and Sr Elizabeth McCormack (1989-1996). 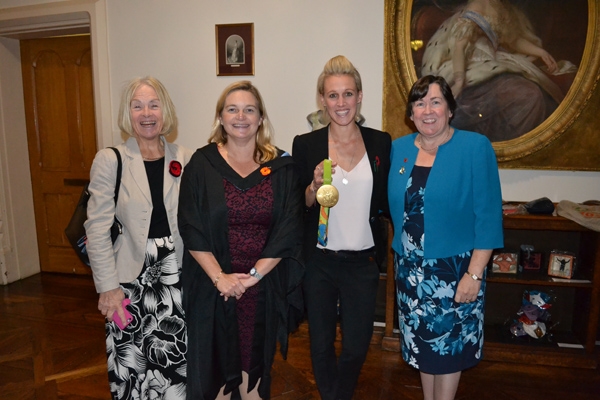