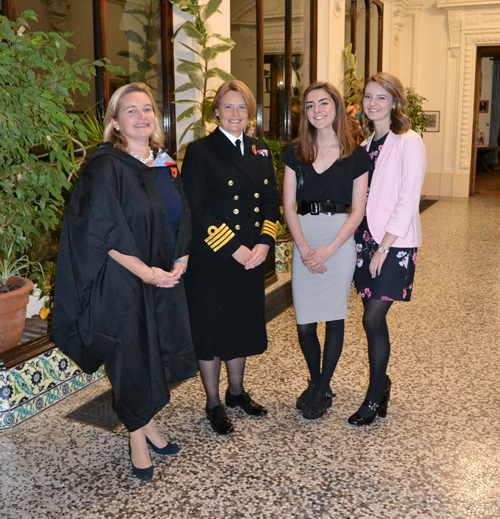 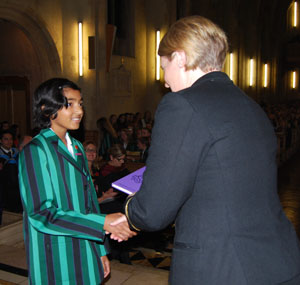 Our annual Prize Giving evening on Friday 10 November 2017 is always a significant event, when the school comes together as a community to look back over the last year. It takes place in the beautiful Chapel and celebrates personal and school achievements in a whole host of arenas, academic, sporting, musical and dramatic as well as unique successes that enrich the lives of all involved.  Academically, the girls’ impressive GCSE results remained high despite grading changes this year with over a quarter of results at grades 8 & 9.  Sixth formers achieved outstanding A level results and secured places at the top universities, studying a wide variety of challenging subjects.

Chair of Governors, Mrs Claire Hamilton, gave a warm welcome, expressing delight that the school continues to go from strength to strength.  In her speech, Head, Alexandra Neil, reviewed the school year and congratulated parents and staff on their support of the girls, enabling them to achieve their best.  She began by acknowledging the imminent bicentenary of the school’s founding order, the Religious of Christian Education, and elaborated on the extent to which the vision of the founding Sisters and Abbé Louis Lafosse continues to underpin the work of the school today as it aims to inspire, encourage and engage young women.

Prizes and certificates were presented by our guest of honour, Captain Ellie Ablett MBE (pictured above with Mrs Neil, Catriona (Head Girl) and Jennifer (Deputy Head Girl).  This was followed by the Senior Choir’s meditative rendition of ‘Ubi Caritas’ by Norwegian composer Ola Gjeilo, a perfect piece for the girls’ unaccompanied voices which sounded ethereal in the Chapel’s acoustics.  This was followed by a change in mood with ‘Fly Me to the Moon’ by Bart Howard. 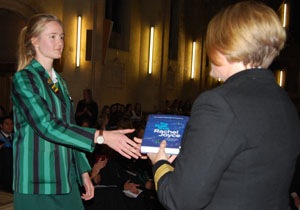 Captain Ablett is one of the most senior women in the Royal Navy and has had a wide variety of roles so far in her distinguished 24-year career.  These have included serving on six warships, diplomatic missions, combat situations and work for the Ministry of Defence.  She is currently the first woman to be Commanding Officer of HMS Raleigh, the largest Royal Navy training establishment in the South West. In her speech, she gave her own career as an example of the opportunities and possibilities available to women today.  As such, she was a real role model and source of inspiration for the girls present and she very much directed her words towards them.   She talked about her desire in her current role to get all the sailors in her care to reach their full potential.  She believes that everyone has something special to offer and that her job is to help them to recognise what that is.  She also paid tribute to the trail-blazing Wrens who she has been helping to celebrate their centenary this year. 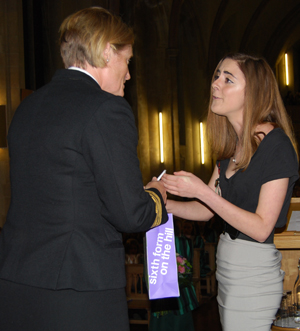 Captain Ablett offered six pieces of advice to the girls to take with them into their futures.  These included: take time to build personal resilience, don’t be afraid to make mistakes, take every opportunity to learn something new, treat others as you would wish to be treated, be yourself and be kind to yourself.

Head Girl, Catriona, concluded the proceedings with courtesy and charm as she gave a thoughtful, Vote of Thanks.  She reflected on the fact that girls at Farnborough Hill are taught to take every opportunity with both hands and that Captain Ablett’s experiences embody this.  She expressed admiration for Captain Ablett’s impressive position in such a male-dominated environment and acknowledged how much this would encourage the girls to challenge stereotypes.  Catriona also thanked her for her words of advice which were very relevant to those present.

The evening concluded with refreshments and a chance for guests, staff, students and parents to catch up with one another.  It was particularly lovely to welcome back many of last year’s Upper Sixth and Year 11 and their families together with recently retired staff, former Headmistresses (Sarah Buckle (2007-16), Jacqueline Thomas (1997 – 2007) and Sr Elizabeth McCormack (1989-1996)) and many other friends of the school.