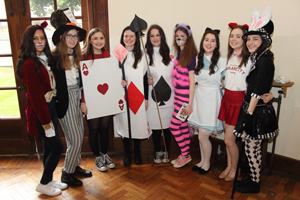 After a lot of hard work and preparation, A level and GCSE examinations began in earnest on Monday 13 May 2019.  The week leading up to this had a celebratory feel as the girls completed their courses and for some, attended their last formal school lessons.

Farnborough Hill girls love to dress up and both year groups took a bit of time out from the serious business of revision, to come together for a theme day; Upper Sixth were characters from Alice's Adventures in Wonderland and Year 11 gave their very colourful take on fashion through the decades.  They also enjoyed a day in uniform, customised and embellished but still recognisable!

For their final day before study leave on Thursday 9 May, Year 11 led an Assembly for the whole school and reflected back over the last five years.  Their Head of Year, Mrs Vivian McCarthy, complimented them on their willingness to try new things, exemplified by the way they embraced a number of firsts such as the Year 9 Residential trip, volunteering at a nursing home in Year 10 and the first Year 11 Prefects.  She commented on how much the girls have matured during their time with her and how they have all become courageous, resilient young women, capable of achieving anything they want to do.

The Upper Sixth's final day on Friday 10 May also ended with an special Assembly led by the girls.  This was a vibrant celebration of the year group's seven years at the School.  The girls thanked all the staff individually and reminisced about the many funny things that have happened and played no less than three films full of evidence of their creativity, friendship and talent. As one of the backing songs so eloquently put it they had "had the time of their lives".  Mrs Alexandra Neil described the Assembly as "poignant, beautiful and full of enthusiasm and infectious energy just like the girls themselves". She depicted them as "wonderful leaders" with a real sense of fun and exhibiting "inclusivity, incredible values and wonderful support for each other".