Service of Thanksgiving for Lucy 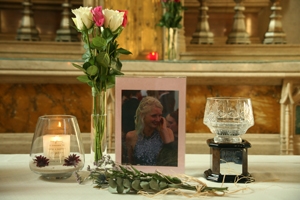 The whole school joined together on Monday 13 February 2017 for a Memorial Service to remember and give thanks for the life of Lucy Pygott, pupil at the school from 2013 to 2016.

The Service began by the Sports Hall where a beautiful magnolia tree was blessed and planted in Lucy's memory.  We prayed that its roots would go deep into the soil and its branches reach to the sky.  We prayed also that this tree would grow tall and strong, that it would produce a mass of flowers that speak of life and beauty - that when we see the flowers, white and star-shaped, our hearts and minds would be lifted in thanksgiving for Lucy and in praise of God, who gave Lucy to us for a short while before calling her home to himself forever.

After the tree-planting, we held a Service in the School Chapel which was planned and prepared with great love by Lucy's friends - they had reflected on the one who had such an impact on them and with whom they shared joy, laughter, fun, and also difficult times, times of tears and struggle.  Through it all, and through facing the tragic death of so lovely a friend, they honoured Lucy in their prayers, readings, reflections, dance and thanksgiving. The Service was very beautiful and all of us who were priviledged to be there, while very sad, were also uplifted by the actions of the Lower Sixth and were deeply proud of them.  Their rendition of 'Lean on Me', one of Lucy's favourite songs from her Junior Chamber Choir days, performed by the whole of the year group, was particularly poignant and a most wonderful tribute to a dear friend.

The Altar (pictured above) held a photograph of Lucy, a candle (the name Lucy means light) and the engraved Berry Bowl for Outstanding Sporting Achievement, won by Lucy at the end of Year 11.  At either side of the Altar, the Lower Sixth placed thoughts, memories and photographs of Lucy.  The sprig of dried flowers beneath the photograph were brought back to School from Lucy's funeral by members of the PE Department.