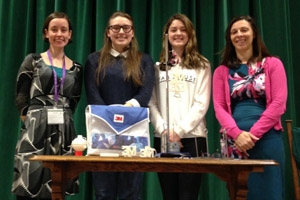 Some of our Year 11 girls were lucky enough to do a work placement at 3M in Bracknell in the Summer of 2016.  Last term, Freya and Laura, now in Year 12, reported back on this experience.  They told the girls in Year 8 about the project on which they had worked, how much they had enjoyed it and how much they packed into their week.

Together with another Year 11 girl, Molly, they had planned and taken to conclusion a presentation aimed at pupils aged 11 to 13 to be subsequently used by STEM (Science, Technology, Engineering and Mathematics) ambassadors in schools. 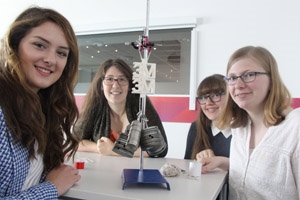 Mrs Sarah Chapman, a Technical Manager at 3M and the girls' mentor, was very impressed with the amount the girls achieved in their week at 3M.  She said that, not only was the presentation they designed perfect for the job but the technical team were so impressed with their experiment that they had developed it further.  It is hoped that this will be used as one of the hands-on exhibits in their Customer Innovation Centre.

As part of their planning, the girls used CAD software to design two 3D plastic pieces.  These were used in their demonstration to show how strong the 3M double sided adhesive tape was, using weights to pull the pieces apart. The girls were also able to work with the production team during their placement and saw how the whole production process works.

The work the girls carried out at 3M subsequently earned them silver Crest Awards from the British Science Association and there is an article about this fantastic achievement on the 3M website: 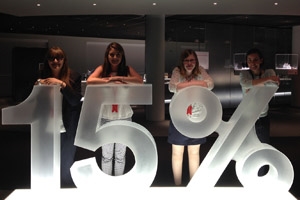 It was very clear to the Year 8 Girls how enthusiastic these Year 12 girls were about their experience and how valuable work experience can be, whether it relates directly to a desired career path or not.

Mrs Chapman is very keen to invite more girls from Year 11 and above to visit the Innovation Centre at 3M and to apply for work placements, as she has been most impressed by the positive attitude and confidence shown by Farnborough Hill girls over the years.  Any girls interested in such an opportunity should ask Mrs Barker for details.