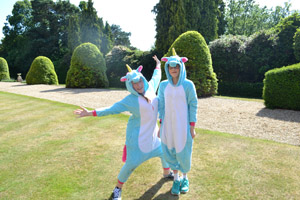 Year 7 had a very exciting and busy day on Wednesday 14 June 2017, with fund-raising, dressing up, a feast and a performing arts evening.

The charity day was full of entertainment and liveliness. Year 7 spent the day in their onesies, organised a cake sale at break and then consumed an immense array of food during their form feast at the end of school. Fortunately they were able to eat their food whilst sitting on the Cloister Lawn in the beautiful sunshine. They have so far raised over £170 in aid of a local charity, ‘Next Chapter Animal Rescue’. Thank you to Miss Rowsell for her organisation of this fun-filled day.

After the feast, parents and friends were treated to a feast of performing arts with a rendition of ‘Rats! The Musical’ which seemed to be a huge success. What started off as being an informal evening to showcase some music, dance and drama soon grew into a rather more formal production. Year 7 have energy in abundance and because of their commitment to rehearsals and enthusiasm, the evening ended up being more like an actual school production. It was a wonderful opportunity to have the whole year group working together and supporting each other and it was lovely to see parents catching up over tea and coffee as they arrived. Every girl played such an important role and it was a really special occasion. Well done, Year 7 and a big thank you to everyone involved, in particular Dr Taylor, Miss Warwick and Mrs Peilow.

View the time-lapse film below to see the performance in under a minute!